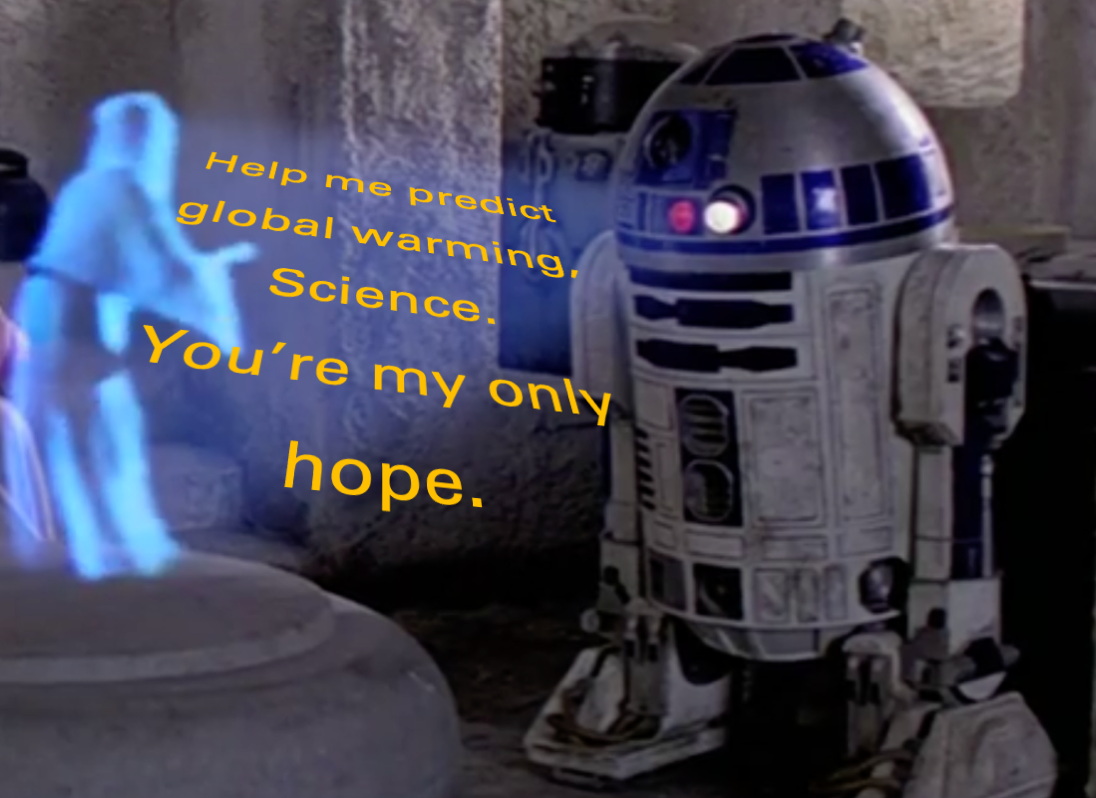 Can we predict global warming using only statistics?

Not if it is unprecedented and nonlinear. You can't do statistics with a sample size of less than one. Science is our only hope.

If you want to make a prediction, you better make sure that you’re either in sample, or that you know the differential equation. 1

Let us start by defining temperature as that which is measured by a thermometer, and global warming as a rise in the global average temperature of the order of 2°C over 200 years. It is the typical magnitude of warming that is expected to occur, say, between 1900 to 2100.

Is global warming unprecedented, i.e., has the planet spontaneously warmed in such a manner in the past? Reliable thermometers were only invented about 300 years ago, and accurate global measurements are available only since the late 19th century. So strictly speaking, we only have records for one event of global warming, the current one that is still ongoing. Therefore, the statistical sample count for the global warming events in the available data is a fraction that is less than one! This is true even though we have over a hundred years of temperature measurements. The measured temperature is the sum of the slow global warming event (the signal) superimposed with many fast events, such as El Niño (the noise) (Figure 1). We need multiple independent samples of global warming to separate the signal properties from the noise.

What if we relax the definition of temperature to allow inferred measurements of temperature? For example, pollen, sediments, ice cores etc. serve as proxy records of indirect information about local temperatures. We then need to use several different models, involving assumptions about isotope fractionation, rainfall patterns, etc., to infer temperatures from these proxies. At this point, we would no longer be analyzing pure data, but model-filtered data.2 This means that we have to take into account model-related errors into the data analysis.

Analyses of proxy records over the past several thousand years show that the current global warming event is unprecedented compared to climate variations during that period.3 If we look further back in time, many millions of years, there were larger warming (and cooling) events, but they occurred over many millennia, not a few centuries (as far as we can tell using imperfect data). So the rapid 2°C warming over 2 centuries remains unprecedented in pace, if not in amplitude.

Once we conclude that the current global warming is occurring in an unprecedented manner, we can no longer rely solely on data to predict its future time evolution. Trying to predict global warming using a purely statistical model is like trying to predict the very first observed El Niño event using a statistical model. Simple linear extrapolation of the observed warming in the tropical Pacific associated with El Niño would have missed the quasi-cyclical aspect of the phenomenon. Now that we have data from many El Niño events, we can build skillful statistical models for El Niño prediction that account for the quasi-cyclical aspect.

Over any short enough recent period, say a couple of decades, we can approximate global warming as a linear trend. Extrapolating that linear trend for a couple of more decades may not be a bad approximation. But beyond that, will the trend stay linear? Or will it start to bend upwards parabolically (or amplify exponentially) at some future time? Or will it start to slow down like the square-root function or flatten like a sinusoid curve? (Figure 2) Data alone cannot tell us how the ongoing global warming event will evolve because we have no examples of past global warming events to fit our statistical models.

Science-based models should be able to predict an unprecedented nonlinear event, but these models suffer from many imperfections. The coarse spatial grid of a global climate model cannot capture important fine-scale processes like clouds. Therefore, approximate formulas called parameterizations are used to represent clouds. Other processes, including the carbon cycle, are also represented using approximate formulas that are calibrated using data. The uncertainties associated with these approximations result in a considerable spread in the predictions of science-based models. The spread turned out to be particularly large in the latest generation of science-based climate models, known as CMIP6.4

Frustration with the growing complexity of global climate models and the uncertainties in their parameterizations can motivate scientists to look for alternatives — perhaps there is a statistical approach that relies on pure data to analyze and predict global warming, uncontaminated by imperfect models. One can learn a lot from statistical analysis of data. But when it comes to actual prediction of global warming, the grass may not really be greener on the statistical side.

To highlight some important issues in applying statistics to global warming, we consider two recent studies that resort to statistical approaches, but in rather different ways. One is the comprehensive IPCC AR6 report5 that applies statistical “observational constraints” to model predictions. The other is a more narrow study, a recent paper by Koutsoyiannis and co-authors (K22) that uses a purely statistical approach to address the causality of climate change.6

A common refrain of those favoring statistical approaches is to let “the geophysical records speak for themselves” (a direct quote from the K22 paper). Like a chatty old person at a party, data can speak and tell you many stories, but they may not be interesting to you. You may want to know how fast the current centennial scale warming will progress, but data may tell you instead about past warming that occurred at a more “glacial” multi-millennial timescale. Often, these data stories need interpretation and translation. You need scientific context to interpret stories about correlations. You need models to translate stories about pollen into statements about temperature.

First, we consider the IPCC assessments. Previously, the IPCC relied solely on science-based global climate models for predicting global average temperature. But for the most recent IPCC assessment (AR6), some of the newer models were predicting much more warming than the previous generation of models, which was at variance with new observational constraints. To deal with this, the IPCC has introduced a complicated hybrid approach that includes statistically constrained “emulator” models.

The emulators are highly simplified climate models with adjustable coefficients. The coefficients in the emulator equations are “calibrated” using results from complex science-based global climate models. For example, if the global models were simulating too much warming during the observed period, the emulators would also do that. But we can adjust some coefficients in the emulators to constrain the rate of simulated warming. The adjusted emulators can then be used to extrapolate into the future. (Ideally, the global models should be adjusted at the process level to improve their simulated warming.7 Presumably the IPCC resorted to a short-cut because adjusting the innards of global climate models is much harder than adjusting the globally averaged parameters of emulators.)

Are these emulators superior to the global climate models? Yes, and no. Yes, because they provide an ad hoc fix for the immediate problem of some models predicting too much warming. No, because they are still calibrated using the global models. The observational constraints cannot fix all the deficiencies inherited by the emulators from the global models. Also, the emulators predict just the globally averaged temperature. Only comprehensive global models can provide the regional detail needed for risk assessment. (The IPCC introduces the notion of a global warming level (GWL) to combine predictions from emulators with global climate models, but the GWL approach does not provide the temporal information needed for risk assessment.8)

Can’t we directly calibrate the emulator using data, thus avoiding the reliance on global climate models? No, because global warming is an ongoing, unprecedented event. The emulator can emulate the known past but not the unknown future of this event. For a given emission scenario, whether the warming trend of the recent decades will continue as a linear trend, or accelerate/decelerate nonlinearly at some future time (Figure 2), will be determined by the behavior of global models used to train the emulator.9 Even using statistics to constrain long-term equilibrium properties like climate sensitivity cannot fully determine the short-term evolution of global warming. To have more trust in the nonlinear aspects of the emulators, we need to improve the parameterizations in global climate models. However, just making the parameterizations more complex may not reduce the uncertainties, as the recent increase in the spread of model predictions indicates.

The K22 paper aims to let the data speak for itself by using pure statistics to study global warming. The paper analyzes two different types of precedented events, ice age cycles and year-to-year climate variability. Correlations between temperature and carbon dioxide are computed to determine which is leading which.

With no scientific context, it is easy to misinterpret statistical correlations because:

We cannot predict or explain an unprecedented nonlinear phenomenon using statistics alone.12 A comprehensive science-based model can predict an unprecedented event because it solves the differential equations governing the phenomenon. But how much we should trust that prediction depends upon how accurately all the relevant equations are known. Statistical analysis can help improve the equations in the science-based models, and constrain some of their properties, but it cannot replace them for predicting the temporal and spatial detail of future global warming.

Winston Churchill said that “democracy is the worst form of government except all those other forms that have been tried”. We could say the same of complex global climate models — they are imperfect but alternatives such as purely statistical models or highly simplified models are even less scientifically defensible for predicting climate. And we need models to plan for the future.

Some outside mainstream climate science would argue that the current global warming is not unprecedented and that warming events of similar pace and amplitude have occurred naturally before. Multiple lines of evidence do not support this argument,3 but we can consider the hypothetical scenario where global warming has precedents in the data record. In that case, some of the statistical limitations described in this article would no longer apply. However, there is no escaping the need for models.

As noted before, pure data cannot be used to determine whether global warming has precedents, since we do not have global temperature measurements prior to the 19th century. We have to use models to calibrate proxies for temperature in making any such determination. Even if we identify enough past global warming events to provide a sizeable statistical sample, we would need to have accurate temperature data with at least decadal time resolution to train a statistical prediction model. If we manage to do that, we would still require good science-based global climate models to add the necessary spatial detail to any statistical prediction of global average temperature.

« Prev: Why are the (climate) numbers so round?
» Next: The perils of predicting perils: (mis)calculating wet-bulb...
To reliably track new posts, please follow using Feedly, RSS aggregators, Mastodon, or the free newsletter version of this blog on Substack. Alternatively, you can check this website every 2–3 weeks. (If you only follow me on Twitter, you may not see the blog announcements due to algorithmic ranking.) You can also download the blog posts as an eBook for offline reading.